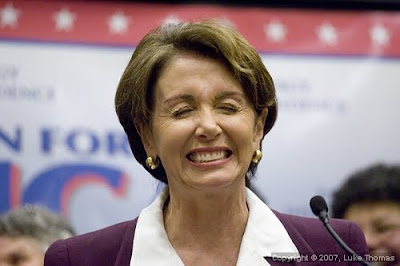 On a Saturday afternoon, in Washington , D. C., an aide to House Speaker Nancy Pelosi visited the Bishop of the Catholic cathedral in D.C. He told the Cardinal that Nancy Pelosi would be attending the next day’s Mass, and he asked if the Cardinal would kindly point out Pelosi to the congregation and say a few words that would include calling Pelosi a saint.

The Cardinal replied, “No. I don’t really like the woman, and there are issues of conflict with the Catholic Church over certain of Pelosi’s views.”

Pelosi’s aide then said, “Look. I’ll write a check here and now for a donation of $100,000 to your church if you’ll just tell the congregation you see Pelosi as a saint.”

The Cardinal thought about it and said, “Well, the church can use the money, so I’ll work your request into tomorrow’s sermon.”

As Pelosi’s aide promised, House Speaker Pelosi appeared for the Sunday worship and seated herself prominently at the forward left side of the center aisle. As promised, at the start of his sermon, the Cardinal pointed out that Speaker Pelosi was present.

The Cardinal went on to explain to the congregation, “While Speaker Pelosi’s presence is probably an honor to some, the woman is not numbered among my personal favorite personages. Some of her most egregious views are contrary to tenets of the Church, and she tends to flip-flop on many other issues. Nancy Pelosi is a petty, self-absorbed hypocrite, a thumb sucker, and a nit-wit. Nancy Pelosi is also a serial liar, a cheat, and a thief. I must say, Nancy Pelosi is the worst example of a Catholic I have ever personally witnessed. She married for money and is using her wealth to lie to the American people. She also has a reputation for shirking her Representative obligations both in Washington, and in California. The woman simply not to be trusted.”

The Cardinal concluded, “But, when compared with Obama and Senators Harry Reid and John Kerry, House Speaker Pelosi is a saint.”

Copyrighted under Creative Commons for Kevin Johnston 2011 at http://solanobilitasvirtus.blogspot.com/
September 17, 2010funny high-functioning sociopathy joke The One Holy Catholic and Apostolic Church what's wrong with people?2 Comments
Patriotism as a Threat to Freedom"The Life You Save May Be Your Own"

2 thoughts on “A Bad Catholic”