Three days ago, between getting settled into law life once again and entertaining my cousin Eamonn who is hoping to get in to GU Law in the fall, I saw Avatar. You should as well. It is spectacular in a way I have never experienced in a theatre before, especially in 3D. In fact, I might go again and see it in 3D, because I simply don’t think that outside of the 3D IMAX it would be worth seeing. The massive scale of the environment and pseudo-interactivity of those sweet 3D goggles is integral to the best Avatar viewing (though my germophobia sensor was off the charts wearing those glasses that someone with TB might have touched). Keep that in mind before it stops showing, so you can see the movie in its full glory…
What struck me both during the movie and subsequently reading about people who wish to be a part of the Avatar reality so badly that they want to kill themselves, was the fine line (or perhaps simultaneous dichotomy) that the film walks between destructive heresy and our yearning for everlasting truth, beauty, and joy. It is clear by now to me – not just as a Catholic but especially as an observant member of the human race – that we are yearning for something greater than ourselves, that many people often will fill with that which they hardly realize is religious or spiritual (even dogmatically so). As I have often discussed and written before, there is a hole within us that we will try to fill with anything that will relieve the angst that comes with being human. Of course, as a religious individual, I believe that hole is God-shaped only, and nothing else will suffice. Many attempts at meaning have been derived by people, in psychological structures made of wealth, sex, power, food, environmentalism, human-rights activism, back-breaking work, and so many other things which as standalone secular constructs will never give us the understanding we seek about life, death, or meaning on this Pale Blue Dot. This movie was edifying (as are the comments of those who wish to live in on Pandora, the planet of those blue thingies) to the fact that we will even try to fill ourselves with things that are fleeting and diminish our humanity in pursuit of alleviating our existential angst. The main character, Jake Sullivan, (as I try not to give away any of the movie) is clearly a victim to this angst, and the movie revolves around this idea.
There is danger though, to what we use to derive meaning for ourselves. I mentioned a few things above that many are tempted to fill their lives with. Some of these causes are even good. But they are not God. The danger for us in filling ourselves with ideologies or philosophical notions is that we will start to live for that which is not ultimately live-giving, as opposed to pushing ourselves to live within the full bounds of true creation…
Which leads to the second motif I derived from the movie, the heretical edge upon which the movie teeters. I have often spoken to close friends (after realizing the oft-unnoticed queerness of the world described in the chapter The Ethics of Elfland in Chesterton’s Orthodoxy) about how God could have improved the world in which we live (I have lots of really strange ideas, like how our bronchial tubes should be on our necks so we never choke on food, or how our bones should be made of wood/plant life as a symbiosis to nature such that transplants, growth, and flexibility would be much improved in humans, among many other things…). In Avatar and the fandom that resulted from it, I heard a kind of theme developing: “James Cameron has created a world better than God’s“. Coined in this way, it can even be considered slightly blasphemous. No matter the case, it is a lighter side of heresy in a way, to imply that God is incompetent and you or I could do a better job. It is heresy precisely because it is not true. One of the beauties of this world God gave us lies in the fact that Cameron, like many artists, authors, directors, and dreamers before him, can conceptualize whatever he wishes, and even bring that concept to our visual and auditory consciousness. It is in our free will and artistic & kinesthetic ability to do such things. However, this is a far cry from creating an actual world of flesh, bone, matter, and physical laws, like the one we live in. But if this Avatar world were real, would it be better than our own? What does better mean? Different? More connected to nature? More beautiful? The word is too subjective to mean anything really. No matter the case, it is simply worth nothing to formulate any sort of worldview on ‘what if’s. What if the world was like that? Yeah, but it isn’t. What if you were never alive? Yeah but you are. Reacting to the reality of here and now is all we can do, and to plan our lives around something else that God could have done is simply nonsensical and a complete waste of time…
(As a side note, I even noticed in the movie that the horses’ breathing tubes were separate from their eating tubes, like one of my suggestions for God for after we destroy ourselves and He builds a new earth…)
Whatever the case, see the movie if you have not yet, and make up your own mind about its aesthetic worth. Personally, though the visuals were stunning, the plot was shallow at best. Still worth it…
And there is a hot alien: 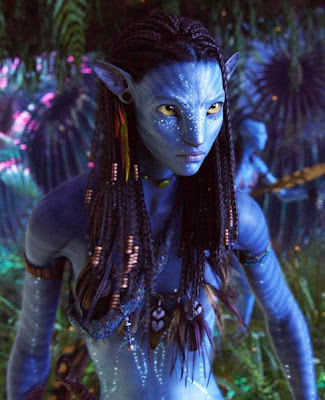