American Thinker Has Been Making Me Mad Lately… 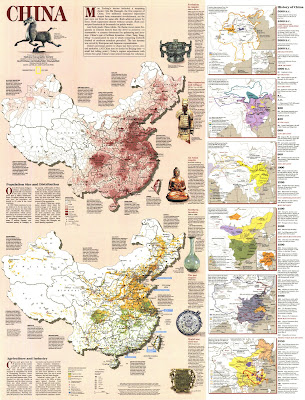 because it is so dang partisan. An article today struck me though, discussing the topic of America’s coming economic demise at the hands of China:


The Department of Defense has sounded an alarm about our access to a strategically vital group of metals called the rare earth elements. A report on the problem prepared by the GAO is not pretty. It concludes that the Chinese now control the production, processing, and manufacture of final products of these vital metals and now own the patents for many of these processes.

The worries of the DoD are well-justified; missile guidance systems, smart bombs, night vision gear, unmanned aircraft, and much more are dependent on the rare earth elements in some way. Without these metals, our weapons technology would be approximately that of the Korean War. Battery-powered tools, hybrid vehicles, the environmentalists’ precious windmills, and almost everything else electric cannot get by without them.

Rare earth elements have been described as the vitamins of modern technology. It took Beijing approximately twenty years to strip this technology from its birthplace in the United States and move it to China.

China’s success in capturing the entire production and manufacturing cycle for the rare earth elements is only the beginning. Their long-term strategy seems to be to repeat their rare earth coup in other sectors of mining and manufacturing. Awash in cash, they are on a gigantic worldwide shopping trip for resources of all kinds. Copper, lead, zinc, and iron are on their list, to name a few. Their reserves of U.S. dollars are being converted to hard assets. Anyone with experience with the Chinese knows that they are in the game to win. Their objective is world domination by whatever means necessary. Aided by our intellectually and morally challenged elites, they stand a good chance of accomplishing it without firing a shot.

Why the Chinese were able, at so little cost, to take away this vital sector of our technology is a question that needs to be asked. The answer is not hard to find. It is the natural result of a fifty-year “jihad” against America’s producers by the environmental left. This alarm signal from the Department of Defense marks the beginning of the endgame in this struggle. It should now be clear that there is nothing less than the survival of our Republic at stake. Fifty years of rapine and pillage by a nihilistic, deranged environmental movement and a government bureaucracy whose sole mitigating feature is its incompetence has left us more and more dependent on somebody else for the commodities and technology necessary for our existence as a nation. A terminally ignorant public has watched with detached indifference or has actively supported this assault on our basic industries. Our national consciousness is in the grip of such insanity that schoolchildren are routinely taught to hate the people and businesses that make their way of life possible. These environmental chickens are now coming home to roost. We are at the point where the bill for this half-century-long economic and environmental stupor is coming due.

This nation is going to have to realize that the ability to produce resources and manufacture products defines its military capability and its standard of living. This fact is as certain as the laws of thermodynamics. Everything you can touch comes from the earth. It must be mined, pumped, cut down, or grown by somebody. Somebody has to process it, refine it, manufacture it, and deliver it. In the vital sector of basic mineral commodities and energy, those “somebodies” need to be domestic, not foreign. The global economy, that our rulers told us would provide all our necessities, is turning out to be the private property of the Chinese, bought with our former money. Our present leadership in Washington, D.C. and most of the rest of our major institutions appear to have no concept of this reality and do not vehemently object to it. It is no accident that the military, our only government institution left with any grounding in reality, is the one to sense the danger.

Mindless obstruction by environmental NGOs and federal regulators now make it almost impossible to develop new or upgrade old productive facilities in this country. Work, absent bureaucratic harassment and NGO opposition, that would have cost hundreds of millions and taken months to complete, now needs billions and takes decades to complete, if it ever is completed at all. We are literally thirty years behind now, and we are rapidly losing the ability to catch up

The government’s solution to this existential crisis is to tax its way out of a recession and enact energy legislation so horrendous that it will guarantee to “fast track” us to third-world status. Environmental zealots in the EPA are on the verge of crippling both the domestic shale oil/gas industry and the Texas petrochemical complex. Legislation is in progress that will essentially make it uneconomic to develop any mineral resources on public land in the United States. The fevered plan to stop Gulf oil development is their latest sortie into the Twilight Zone. The damage now being inflicted on this country is long-lasting and, if not reversed, fatal. If these insane initiatives are implemented, the day will not be far off when the United States will not have the talent, technology, or money to restart its productive sector even if it wants to.

When a country is on a social and economic course so suicidal that the Russians are warning us about it, some introspection is called for. Post-racial, post-industrial, postmodern, post-fossil fuel, post-common sense America has very little time left to straighten out its priorities and reverse its slide into what Leon Trotsky called “the dustbin of history.”

The ironic epilogue to all this is that when the United States completes its journey to political, economic, and military impotence, the Chinese will walk in and buy up our vast reserves of mineral and energy resources with our own dollars and produce them for their own use. They will not be bothered by environmental niceties, and they will have the power to do as they please. Environmentalists in their uncompromising, unhinged war against our producers will have destroyed the environment they were claiming to save.