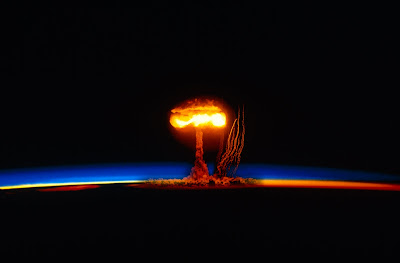 It is my opinion that the use of this barbarous weapon at Hiroshima and Nagasaki was of no material assistance in our war against Japan. The Japanese were already defeated and ready to surrender because of the effective sea blockade and the successful bombing with conventional weapons.

The lethal possibilities of atomic warfare in the future are frightening. My own feeling was that in being the first to use it, we had adopted an ethical standard common to the barbarians of the Dark Ages. I was not taught to make war in that fashion, and wars cannot be won by destroying women and children.

– William Leahy, Chief of Staff to Presidents Franklin Roosevelt and Harry Truman, I Was There

Copyrighted under Creative Commons for Kevin Johnston 2011 at http://solanobilitasvirtus.blogspot.com/
January 19, 2011artsy quote war what is it good for?
Things Worth Discussing – 01-22-11 EditionOld Men Start Wars & Young Men Die in Them