Do They Grant Patents for Impossible Inventions?

All right, all right. This week is officially throwback week (because I say so). So I will be putting something up every day that is a throwback from my past a little bit (but obviously relates to other things, because obviously who cares about what I am doing). This one is for the science nerds and it is one of my mad science ideas…

I was an engineering major freshman year of college, before I was a computer science major sophomore year and 10 other majors before I graduated. I hated the math in physics classes (even though I wasn’t bad at it, I just am more of a concepts guy than a details guy – and Richard Feynman agrees with me), but I LOVE physics. Here was one of the crazy ideas I had that made me seem like a mad scientist to my parents (who really thought I had gone mental when I called them one night and gave them a manic and frenzied rundown of the invention…). Here’goes:

I made you this stupidy picture, in a paint program which shows how poor I am with a mouse, because it shows the invention so you have a visual of what the hell I am saying: 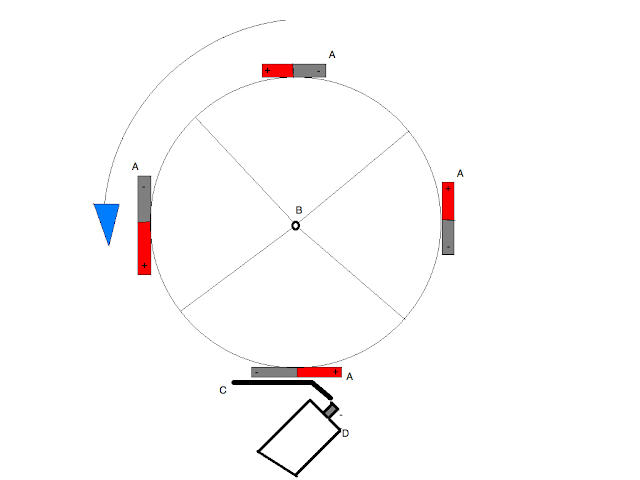 A. Dipole magnet (at least 4, staggered around the wheel).
B. Frictionless axle.
C. Meta-material blocker.
D. If meta-material can block magnetism, a simple magnet will do. Otherwise, an Electromagnet, or alternatively, a wire parallel to the axis of the wheel.

All right. So what you do is flick (or push, if the engine is large enough) the wheel (mounted to a frictionless or near-frictionless axle) in the counter-clockwise direction. Now there are two ways this can work, depending on the existence of a meta-material. The first engine works by having C block the magnetism until each magnet A pushes past the threshold of the blocker. At that time, the positive charge of magnet D engages the opposite pole of magnet A, pushing the magnet from it and around the wheel. This reaction should allow for the distance between magnets A to be covered quickly, and the chain reaction of spinning begins.

However, I am not so sure such a material exists in the form I wish (some do exist, but they are charged in some way and could upset the rate of spin of the wheel). So alternatively, an electromagnet powered by a battery will do (or a simple wire parallel to the axis, which as all  second-semester physics majors know creates a charge perpendicular to magnetic force when electrically charged). When each magnet reaches the bottom of the wheel’s loop, the electromagnet/wire flips on with a small charge and pushes the magnet in the counter-clockwise direction, bringing the next magnet and turning on the electromagnet/wire again, which would repeat the process ad infinitem.

No matter which of the two above designs is chosen, the resulting kinetic energy is then routed to an electric generator (this is the easy part), which stores the power in a capacitor or battery or similar array. And though the math is beyond me at this point, I am certain that the summation of the energy output is much greater than the input of a small battery flicking on and off (one engineer I asked put the total wattage at 20 kW/day for a fridge-sized rendition of this invention. Which he could have of course pulled out of nowhere, and probably did.). And ta-daaaa! It’s that simple…

There is a problem with this invention, if you read that last paragraph. If it worked, scientists would need to re-write the laws of physics (or the summation of energy in magnets, which is probably easier). Namely, the first & second laws of thermodynamics*. Oops. But hey, it has happened before…

But really, you know what? If you can make this thing, do it. I don’t even need to be a part of the patent. I just want to see it done for energy – if it is possible, that is. Can you imagine what would happen if we had these things instead of gas engines and other poor-efficiency generators? Probably world peace. Or World War III. That’s what. Welp, cya later.

*Note – No matter who you are, you should know the three laws of thermodynamics:

(Energy can neither be created nor destroyed. It can only change forms. In any process in an isolated system, the total energy remains the same.)

(As temperature approaches absolute zero, the entropy of a system approaches a constant minimum.)

Copyrighted under Creative Commons for Kevin Johnston 2011 at http://solanobilitasvirtus.blogspot.com/
April 12, 2010invention Kevin is insane meeeeeeeeeeeeeeeeeeeee physics science
It’s Been Too Long…What’s Up With…