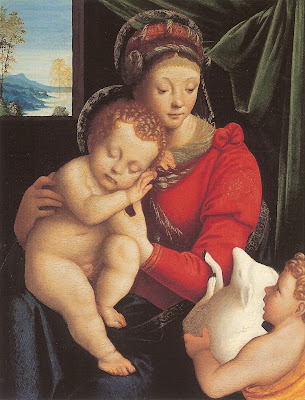 So what are you frightened of? Why are you trembling before the face of the Lord when he comes? God has come not to judge the world, but to save it! Do not run away; do not be afraid. God comes unarmed; he wants to save you , not to punish you. And lest you should say ‘I heard your voice and I hid myself,’ look-he is here, an infant with no voice. The cry of a baby is something to be pitied not to be frightened of. He is made a little child, the Virgin Mother has wrapped his tender limbs in swaddling bands; so why are you still quaking with fear? This tells you that God has come to save you, not to lose you; to rescue you, not to imprison you.

God is already fighting your two enemies, sin and death–the death of both body and and soul. He has come to conquer both of them; so do not fear, he will save you from them. He has already conquered sin in his own person, in that he took our human nature upon himself without spot of sin. From this moment on he pursues your enemies and overtakes them, and will not return until he has overcome them both. He fights sin with his life, he attacks it with his word and example; and in his passion he binds it, yes, binds ‘the strong man and carries off his goods’. In the same way it is in his own person that he first conquers death when he rises as ‘the first fruits of those who sleep, the firstborn from the dead’. From now on he will conquer it in all of us as he raises up our mortal bodies, and death, the last enemy, will be destroyed.

In his rising he is clothed with honor, no longer wrapped in swaddling bands as at his birth. At his birth, in the wide embrace of his mercy, he judged no one; but at his resurrection he ties around his waist the girdle of righteousness which in some sense must define the embrace of his mercy. Henceforth we must be ready for judgment which will take place when we ourselves are raised. Today he has come to us as a little child, that before all else he might offer all people mercy; but in his resurrection he anticipates the final judgment when mercy must needs be balanced by the claims of righteousness.”

Copyrighted under Creative Commons for Kevin Johnston 2011 at http://solanobilitasvirtus.blogspot.com/
December 20, 2010quote religion The One Holy Catholic and Apostolic Church
Empire of IllusionIn for a Big Hurt…