How This Side Thinks 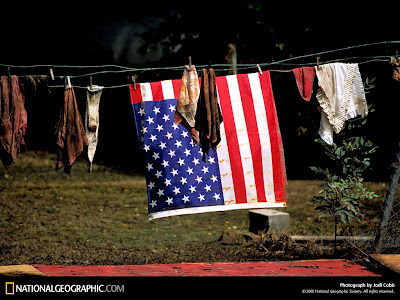 From HotAir, addressing why it is that conservatives and Republicans are not the “party of no” as much as a people seeking as little governmental intervention as possible and allegiance to the foundations and traditions of Western Culture (which seems hard to say about Republicans these days, if you ask me…):


Our support for a massive government program does not increase when you tell us we’re not allowed to ask questions about it.

We’re not racists. We’re also not racialists. We don’t think a wise Latina is inherently more qualified to do anything than a wise Asian woman, a wise white woman, or a wise white man. We’re tired of being fed excuses for high government offices staffed by anything but the best people for the job. There are too many high government offices, so we’d like some of Obama’s absurdly incompetent appointees to take their titles with them when they leave . . .

We don’t like having to fight desperate battles to save our freedom and future from socialist politicians every ten or twenty years. We don’t like having our time wasted with trillion-dollar statist fantasies, when our government is already trillions of dollars in the red. We’re tired of checking the papers each day, to see which group of us has been targeted as enemies of the State. We’re growing impatient waiting for the Democrats to come up with ideas that don’t require their supporters to hate someone. We’ve had our fill of “progressives” who act as if we’re living in 1909, and none of their diseased policies have ever been tried before.

We believe government should be punished for failing to live up to the expectations of its citizens, not the other way around. We don’t think people who destroy thousands of jobs and billions of dollars in market value should get a pass because they meant well. We’ve had enough of dodging a massive State that wants to organize, subsidize, penalize, and divide us. We refuse to pay tithe to a religion we don’t support, including the official State religion of global warming. We demand honesty, humility, and transparency from our public servants, no matter how many elections they’ve won. We won’t settle for making the only important decisions about our futures in the voting booth, once every couple of years.

We don’t blame people for showing up to grab their share of a government handout. We blame the people who stole the money from the rest of us, and put it on the table for them. We don’t think respect for private property ends at a certain income level, or that only some people should be applauded for doing their best to get ahead in life. We believe in the power and righteousness of capitalism, the exchange of goods and services between free people acting in their own best interests. There is no moral substitute for it. Every other scheme for governing human affairs amounts to a few dominating some, to the applause of others. Our freedom is not for sale, and we reserve the right to defend it from theft.

We don’t invest our hopes in the government. It is beneath the dignity of free men and women to spend their days hoping a politician decides to provide for our needs. We face the future, not with passive and helpless “hope”, but with active and dynamic faith in ourselves, and our fellow Americans. We are opposed to a political class that tries to cultivate our hopes by showering us with fear. We don’t trust politicians with our fortunes, much less with our lives. In fact, we don’t trust politicians much at all… but we absolutely require them to trust us.

We do not regard America as the sole country on Earth that should be forbidden from taking pride in its history, traditions, and achievements. We reject the notion that celebrating our traditions is an automatic insult to anyone else. We owe absolutely no apologies to murderous dictators or unelected tyrants, and we care little for their feelings. We believe there are many lessons to be learned from our history, by all the people of the world, and we cannot teach those lessons if we allow ourselves to be shamed into silence. We will never hesitate to call evil by its proper name, or give evil men good reasons to fear us.

Copyrighted under Creative Commons for Kevin Johnston 2011 at http://solanobilitasvirtus.blogspot.com/
November 18, 2010article dumb conservatives END THE FED
Sunday SongPuzzling Over How the Other Side Thinks