My new niece is about the cutest thing you have ever seen. 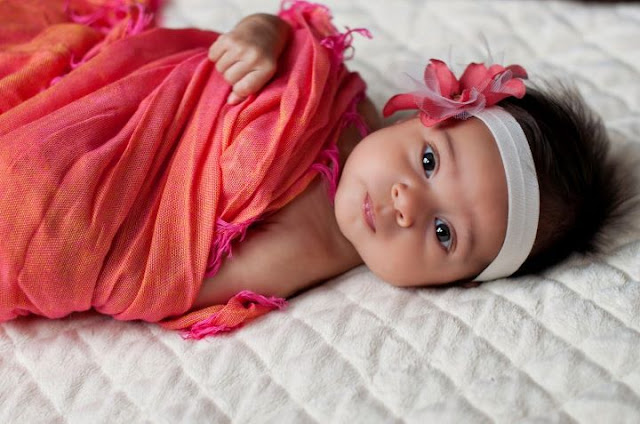 Babies are one of the best things in life, I think. The person who can be in a room with a baby and not be somehow drawn toward it is strange indeed. I wish I had more time to post some thoughts about the virtues that babies seem to possess, lack, and inspire in others, but duty calls. Chesterton had a few thoughts from different places, though, and his are far more pertinent and revealing than anything I could craft…


The two facts which attract almost every normal person to children are, first, that they are very serious, and, secondly, that they are in consequence very happy. They are jolly with the completeness which is possible only in the absence of humour. The most unfathomable schools and sages have never attained to the gravity which dwells in the eyes of a baby of three months old. It is the gravity of astonishment at the universe, and astonishment at the universe is not mysticism, but a transcendent common-sense. The fascination of children lies in this: that with each of them all things are remade, and the universe is put again upon its trial. As we walk the streets and see below us those delightful bulbous heads, three times too big for the body, which mark these human mushrooms, we ought always primarily to remember that within every one of these heads there is a new universe, as new as it was on the seventh day of creation. In each of those orbs there is a new system of stars, new grass, new cities, a new sea.

There is always in the healthy mind an obscure prompting that religion teaches us rather to dig than to climb; that if we could once understand the common clay of earth we should understand everything. Similarly, we have the sentiment that if we could destroy custom at a blow and see the stars as a child sees them, we should need no other apocalypse. This is the great truth which has always lain at the back of baby-worship, and which will support it to the end. Maturity, with its endless energies and aspirations, may easily be convinced that it will find new things to appreciate; but it will never be convinced, at bottom, that it has properly appreciated what it has got. We may scale the heavens and find new stars innumerable, but there is still the new star we have not found–that on which we were born.

But the influence of children goes further than its first trifling effort of remaking heaven and earth. It forces us actually to remodel our conduct in accordance with this revolutionary theory of the marvellousness of all things. We do (even when we are perfectly simple or ignorant)–we do actually treat talking in children as marvellous, walking in children as marvellous, common intelligence in children as marvellous. The cynical philosopher fancies he has a victory in this matter–that he can laugh when he shows that the words or antics of the child, so much admired by its worshippers, are common enough. The fact is that this is precisely where baby-worship is so profoundly right. Any words and any antics in a lump of clay are wonderful, the child’s words and antics are wonderful, and it is only fair to say that the philosopher’s words and antics are equally wonderful.

The truth is that it is our attitude towards children that is right, and our attitude towards grown-up people that is wrong. Our attitude towards our equals in age consists in a servile solemnity, overlying a considerable degree of indifference or disdain. Our attitude towards children consists in a condescending indulgence, overlying an unfathomable respect. We bow to grown people, take off our hats to them, refrain from contradicting them flatly, but we do not appreciate them properly. We make puppets of children, lecture them, pull their hair, and reverence, love, and fear them. When we reverence anything in the mature, it is their virtues or their wisdom, and this is an easy matter. But we reverence the faults and follies of children.

We should probably come considerably nearer to the true conception of things if we treated all grown-up persons, of all titles and types, with precisely that dark affection and dazed respect with which we treat the infantile limitations. A child has a difficulty in achieving the miracle of speech, consequently we find his blunders almost as marvellous as his accuracy. If we only adopted the same attitude towards Premiers and Chancellors of the Exchequer, if we genially encouraged their stammering and delightful attempts at human speech, we should be in a far more wise and tolerant temper. A child has a knack of making experiments in life, generally healthy in motive, but often intolerable in a domestic commonwealth. If we only treated all commercial buccaneers and bumptious tyrants on the same terms, if we gently chided their brutalities as rather quaint mistakes in the conduct of life, if we simply told them that they would ‘understand when they were older,’ we should probably be adopting the best and most crushing attitude towards the weaknesses of humanity. In our relations to children we prove that the paradox is entirely true, that it is possible to combine an amnesty that verges on contempt with a worship that verges upon terror. We forgive children with the same kind of blasphemous gentleness with which Omar Khayyam forgave the Omnipotent.

The essential rectitude of our view of children lies in the fact that we feel them and their ways to be supernatural while, for some mysterious reason, we do not feel ourselves or our own ways to be supernatural. The very smallness of children makes it possible to regard them as marvels; we seem to be dealing with a new race, only to be seen through a microscope. I doubt if anyone of any tenderness or imagination can see the hand of a child and not be a little frightened of it. It is awful to think of the essential human energy moving so tiny a thing; it is like imagining that human nature could live in the wing of a butterfly or the leaf of a tree. When we look upon lives so human and yet so small, we feel as if we ourselves were enlarged to an embarrassing bigness of stature. We feel the same kind of obligation to these creatures that a deity might feel if he had created something that he could not understand.

But the humorous look of children is perhaps the most endearing of all the bonds that hold the Cosmos together. Their top-heavy dignity is more touching than any humility; their solemnity gives us more hope for all things than a thousand carnivals of optimism; their large and lustrous eyes seem to hold all the stars in their astonishment; their fascinating absence of nose seems to give to us the most perfect hint of the humour that awaits us in the kingdom of heaven.

– The Defendant, In Defense of Baby-Worship


All the towering materialism which dominates the modern mind rests ultimately upon one assumption; a false assumption. It is supposed that if a thing goes on repeating itself it is probably dead; a piece of clockwork. People feel that if the universe was personal it would vary; if the sun were alive it would dance. This is a fallacy even in relation to known fact. For the variation in human affairs is generally brought into them, not by life, but by death; by the dying down or breaking off of their strength or desire. A man varies his movements because of some slight element of failure or fatigue. He gets into an omnibus because he is tired of walking; or he walks because he is tired of sitting still. But if his life and joy were so gigantic that he never tired of going to Islington, he might go to Islington as regularly as the Thames goes to Sheerness. The very speed and ecstasy of his life would have the stillness of death. The sun rises every morning. I do not rise every morning; but the variation is due not to my activity, but to my inaction. Now, to put the matter in a popular phrase, it might be true that the sun rises regularly because he never gets tired of rising. His routine might be due, not to a lifelessness, but to a rush of life. The thing I mean can be seen, for instance, in children, when they find some game or joke that they specially enjoy. A child kicks his legs rhythmically through excess, not absence, of life. Because children have abounding vitality, because they are in spirit fierce and free, therefore they want things repeated and unchanged. They always say, “Do it again”; and the grown-up person does it again until he is nearly dead. For grown-up people are not strong enough to exult in monotony. But perhaps God is strong enough to exult in monotony. It is possible that God says every morning, “Do it again” to the sun; and every evening, “Do it again” to the moon. It may not be automatic necessity that makes all daisies alike; it may be that God makes every daisy separately, but has never got tired of making them. It may be that He has the eternal appetite of infancy; for we have sinned and grown old, and our Father is younger than we. The repetition in Nature may not be a mere recurrence; it may be a theatrical encore. Heaven may encore the bird who laid an egg. If the human being conceives and brings forth a human child instead of bringing forth a fish, or a bat, or a griffin, the reason may not be that we are fixed in an animal fate without life or purpose. It may be that our little tragedy has touched the gods; that they admire it from their starry galleries, and that at the end of every human drama man is called again and again before the curtain. Repetition may go on for millions of years, by mere choice, and at any instant it may stop. Man may stand on the earth generation after generation, and yet each birth be his positively last appearance…

[Edit: Thanks to Claire for this one…

Copyrighted under Creative Commons for Kevin Johnston 2011 at http://solanobilitasvirtus.blogspot.com/
December 8, 2011AMAZING article baby Chesterton family LOVE quote religion something everyone should know TED The One Holy Catholic and Apostolic Church theism
What You Believe DOES MatterThe Failures of Fiat Money