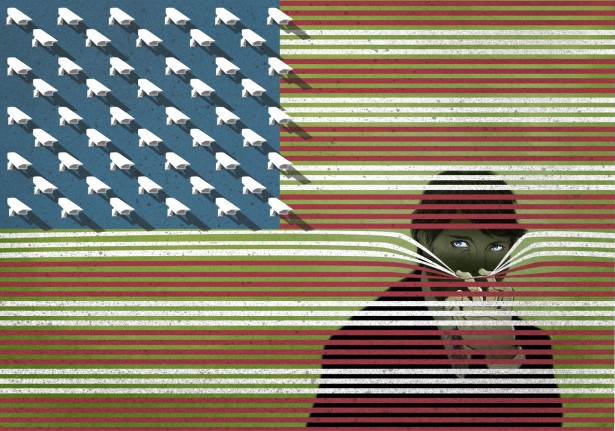 A column from LewRockwell this morning spoke to me of the true political labels that matter: Authoritarian versus Libertarian…


The question isn’t whether you’re a liberal or conservative.

Who can say what either of those labels means anymore? Like “Christian,” a liberal (or a conservative) can be anything he wants to be and still claim the label.

The question, I think, is whether you’re an authoritarian.

It is a question that neatly cleaves one group of people from another. There’s no hedging, no getting around the central thing – which is: Do you – or don’t you – support using force to compel other people to do what you want them to do? If you do, then you are an authoritarian. It does not matter whether your desire to control others is based on “liberal” goals or “conservative” ones.

To your victims, the defining thing is force.

Modern “conservative” authoritarianism most typically expresses itself in literal blood lust. They are eager to go to war, as the first resort. (Our turgid ex-Decider’s fight fer freedom in Iraq being the obvious recent example.) They are remarkably untroubled by the indiscriminate death and destruction that result, taking the attitude that one must break eggs to make an omelette.

“Liberal” authoritarians on the other hand, like to believe they are helping people – by forcing them to do X or Y (or making X pay so that Y may have). The typical liberal authoritarian is (unlike the “conservative authoritarian) personally mild-mannered and gentle-seeming. He, personally, would never resort to violence. But he is enthusiastic to see the government use force to achieve aims he deems worthy. (A recent example is heaf cayuh reform. The liberal authoritarian delights in seeing the government force people to buy a product he thinks they should have – even though they may disagree with him- and hugs the very strange idea that heaf cayuh – that is, medical supplies and the time/talent of doctors, etc. – is a right to which everyone is entitled.)

The common denominator is – force. We demand that you do This or That and if you do not comply, we shall literally assault you.

It is never put quite that plainly, but it is the bottom line.

Refuse to be drafted to kill and maim strangers in another country who have done you no harm (or fund the system that does it in your name) and the “conservative” authoritarian will insist that you be imprisoned. Fail to “purchase” the heaf cayuh insurance that the “liberal” authoritarian demands you “purchase” and he will be pleased to first fine you and, should you decline to pay the fine, eventually, seize your assets or (failing that) seize you.

The “conservative” authoritarian assuages any misgivings his stunted humanity might still cling to by telling himself that Security, or The National Interest (or even worse, “protecting our freedoms”) justifies the open-ended, never-to-be-questioned sacrificial offerings to the arms merchants and war profiteers.

The “liberal” authoritarian tells himself that he is working for equality – or toward a just society.

Neither takes the time to ask himself: Would I put my next-door neighbor in prison (or threaten him with violence) if he declined to do as I wish and asked that I leave him in peace?

It pulls one way or the other, but in the end, the result is always the same.

“Liberal” authoritarians win a legislative victory one year – and millions are forced to buy the product of a private, for-profit business (heaf cayuh insurance). “Conservative” authoritarians seize control and, suddenly, we are literally assaulted by government agents before being allowed to get on a commercial airplane.

From the Macro at the federal level to the Micro at the local/county level, this is the nature of the process – and the system.

The question that is never asked is: Do I have any right to impose my will on my neighbor, who is doing me no harm? For to ask that simple but penetrating question – and to come to grips with the moral implications of the answer – would cause the “conservative” and “liberal” authoritarian alike to suddenly see the blood each have on their hands.

To me, Republicanism has always been far more attuned to the cries of freedom from within this country (though in the last 30 years or more perhaps less attuned to those cries coming from without). That and the pseudo-commitment to Pro-Life causes gives it a one-up to Democratic agendas. Even so, I don’t think it is the best way things could be done. No matter the case, the Authoritarians are in vast majority, and it is doubtful things will change on that account…

Two more finals until freedom. The blog will explode with content at that point…

2 thoughts on “Reframing Our Labels”